Henderson had a degree in chemistry and mathematics, but when he came to New York in 1920, the only job he could find was in the music industry because of race discrimination. He worked as a music director and pianist for the Black Swan label.

In 1922 Henderson formed his first band with Don Redman. Thanks to Redman's innovative arrangements, they became quickly the best Afro-American band in New York. When Louis Armstrong joined the band in 1924, Redman started to contribute more swinging tunes.

After Redman left the band in 1927, Benny Carter and Henderson's younger brother Horace Henderson helped with the arrangements, before Fletcher Henderson became himself a top arranger in the early 1930s.

The band was very popular but Henderson a bad business men, so he started to work for other bands. In 1934 Benny Goodman bought some arrangements from him for his weekly radio show “Let's dance”.

In 1936 Goodman became the “King of Swing“, ironically with arrangements, Henderson already was playing with his band many years before. In 1939, Henderson became the staff arranger of Benny Goodman's band.

Queer Notions is in a certain way quite awkward, with strange harmonies. Queer as its title. I guess, it was a difficult arrangement to play for the band.

Well, I have a soft spot for strange songs! 😉 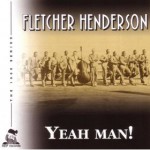