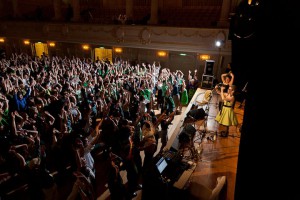 I can't write about the entire Leapin' Lindy weekend because I only attended worked at the party on Saturday night. And this night was epic!

I'm still delighted by the atmosphere and the energy in the beautiful ballroom of the Kultur-Casino in the middle of the city of Bern.

The hosts of the evening were Eva and Nadja. They did a great job, brought in a lot of fun into their speeches and made the crowd ready for the band!


The Importance of Great (Live) Music 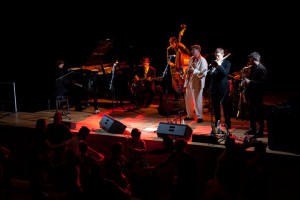 Thanks to its courage of the organising team to book Gordon Webster 7, we had one of the best contemporary swing bands in town and every minute was worth it! The band pushed the dancers and the dancers pushed the band – just the way it should be. Naomi Uyama, who was also in the teacher line-up, sang with the band and she was wonderful as well.

One highlight was for sure the very last song, she sang a slow number only accompanied on piano by Gordon. The band was supposed to play three sets of 30 minutes but they were at least 45 minutes each.

I was DJ'ing when the band not was playing so I can't tell you how good the DJ music was, you have to ask somebody else :-). A local teacher and good friend of mine was asking me, if it was difficult to DJ beside such a great band. Indeed, this is a very good question but honestly, I never was thinking about that. Like always at such events I try to feel the crowd and build my DJ set on the go. And of course, I tried not to play the same tunes than the band.

There was one moment, during the last song by Naomi and Gordon I was mentioning before, when I asked myself what song shall I play NOW. I decided to play a complete different song and I guess it worked out.

Of course, there was a teacher showcase. And the audience loved it. Watch the following videos:

That was one of the best Swing dance nights in Switzerland I've ever been to! Period.