After last week's song from the 1970s, here is another fantastic tune which was recorded many years after the swing era:

When I Grow Too Old To Dream” by Arnett Cobb.

When Cobb was succeeding Illinois Jacquet with Lionel Hampton‘s Big Band (1942-1947), he gained his initial fame.

In 1948, he led a popular band but due to health issues, he needed an operation of his spine and his career stopped. In 1951, he was back and led another band for five years.

A serious car accident in 1956 injured his legs by crushing them and he needed to use crutches for the rest of his life.

In 1959, he returned once again to play and record actively. He moved to Houston, Texas and played mostly locally. However, in 1973 he occasionally toured and recorded nationwide. In 1988, he even was touring Europe with Jimmy Heath and Joe Henderson.

When I Grow Too Old To Dream

This title was on Arnett Cobb's debut for the label Prestige and his first recording as a leader after his car accident in 1956 (not to be confused with the version from 1947, which sounds quite different.)

An easy going swing tune which I also like to use to teach beginners classes.

Be aware: the song is looong! 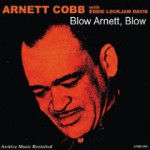