After 100, there is a new 1! It's like to push reset and start from the beginning.

Now, I mean this in a figurative sense.

So far, I tried to avoid too many repetitions of artists and song titles. From now on, I will be less strict with myself.

As you may know, “I Found A New Baby” is one of my all time favorite songs and I love to collect as many versions of it as I could find.

This Song of the Week is a wonderful version by Buck Clayton from 1953, hided behind a different song title, though!

A well done YouTube clip with many pictures and magazine covers from 1953!

In Los Angeles, Clayton formed his first big band that had a residency in Shanghai China in 1934/1935. The band was called “Harlem Gentlemen”.

Back in the U.S., Clayton visited Kansas City in 1936 and was invited to replace Hot Lips Page in Count Basie's orchestra. He stayed with Basie until 1943 to serve in the army.

In the late 1930s, he was also featured on sessions with Lester Young, Teddy Wilson and Billie Holiday.

After the army service, Clayton became an arranger for Count Basie, Benny Goodman and Harry James. In the late 1940s he formed a new band and toured Europe in 1949 and 1950.

During the 1950s and 1960s, he kept leading a band, was touring Europe again several times and was organizing jam sessions. He also appeared in different films.

Lip and health problems forced him to end his playing career in the late 1960s. After a break, Clayton became active in music again as arranger and composer. In the early 1980s he also became an educator.

In 1987, he led his own big band playing almost exclusively his compositions and arrangements. In the same year, his autobiography “Buck Clayton's Jazz World“, co-written with Nancy Miller-Elliot, was published.

Gift For The Club

“Gift For The Club” was recorded during a tour in Europe in 1953. I couldn't find out why the song was renamed. 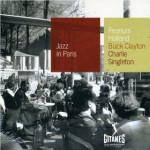 Would you prefer this song for Lindy Hop or Balboa? Share your thoughts in the comment section below!