This is my second post of the super short series “My 2 Top Swing Albums released in 2011“. If you missed the first one, then you can read here part 1. 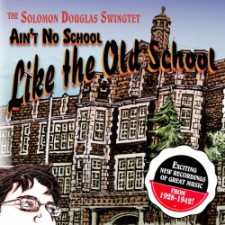 This studio album was recorded at the end of a three-week tour of the eastern states and provinces (in the US), having played 16 gigs in 20 days.

Led By A Swing Dancer and DJ

The ten-piece band is led by jazz pianist Solomon Douglas. In 2006 he toured the United States and Japan as a member of the Glenn Miller Orchestra.

Nowadays he is a freelance musician and dance instructor. Solomon teaches mainly Lindy Hop and Blues and is also a Swing and Blues DJ.

The repertoire of the Swingtet is rooted in that of the Count Basie band and that of the Duke Ellington band, complemented with other big band standards and classic jazz tunes.

It was a good decision to record that album after a tour, when the musicians are well attuned. You can feel that with every note! The band is swinging like mad and you can't believe that there are “only” 10 of them playing all these gems. They love for sure what they are doing!

All 17 tunes are instrumental, originally recorded between 1928 – 1942. The new arrangements are closely based on the original ones without the requirement to sound exactly like them.

Here we have a fantastic album of old-style jazz songs with different tempos and styles.

And the clean sound is awesome, very direct! The different instruments are well balanced and nicely mixed.

I like the courage to choose less known songs like “Bizet Has His Day” or “Queer Notions”, both favorites of mine (and featured as Song of the Week #82 and #83)! I also love the versions of “Rose Room” and “Blues In The Air”.

A Must For Dancers, Music Lovers and DJs

Solomon and his musicians dared the balancing act of re-creation and adding their own style, and it was worth it!

The songs have a good length and different tempos for Lindy Hop, Balboa and Blues dancers. An album by a dancer for dancers – a pure winner!