Cabell “Cab“ Calloway (Dec. 25, 1907 – Nov. 18, 1994) ranked among the most famous black stars in the 1930s, a charismatic and unique performer. He was a jazz vocalist, dancer and bandleader of one of the most popular African American big bands during the Harlem Renaissance and jazz and swing eras of the 1930s-40s.

Calloway was also an ambassador for his race, leading one of the most popular African American big bands during the Harlem Renaissance and jazz and swing eras of the 1930s-40s, with Harlem’s famous Cotton Club as his home stage.

Best known for his “Hi de hi de hi de ho” refrain from signature song “Minnie the Moocher,” portrayal of Sportin’ Life in Porgy and Bess (1952), and role in The Blues Brothers (1980), Cab influenced countless performers, including Michael and Janet Jackson, and many of today’s hip-hop artists.

American Masters celebrates Calloway's career and legacy during Black History Month with the new documentary Cab Calloway: Sketches which was premiering in the U.S. on February 27, 2012, on PBS.

NOTE: If you are not able to watch the documentary due to regional restrictions, you may install a software like Hotspot Shield to fix that. If you do so, you act on your own risk! (I've tested it and it works well.)

Check out About the Documentary for more informations.

Cab Calloway: Sketches is a co-production of Artline Films, ARTE France, and AVRO, in association with Inscape Productions and THIRTEEN’s American Masters for WNET.

This program is made possible in part by the support of CNC, PROCIREP, ANGOA, and SACEM.

YouTube is full of surprises. Again and again you can discover new clips and documentaries about Swing dancing.

Yesterday, I've found (via Facebook) a documentary from 1988 about Lindy Hop, uploaded by “sabinoson”.

The Call Of The Jitterbug

A film by Jesper Sorensen, Vibeke Winding and Tana Ross.

Some of you who attended Herrang Dance Camp last summer, had the opportunity to watch the documentary “The Unforgettable Hampton Family“, together with Dawn Hampton in person.

The interest was appropriately high and the library, where it was shown, fully packed.

At the end of September, buddhaboogie, better known as big band leader George Gee, published the documentary on his YouTube channel.

The documentary celebrates the Hamptons, a talented African-American family who overcame poverty and prejudice to build successful musical careers.

The Unforgettable Hampton Family is a production of BetterThanFiction Productions for WNET. Produced, written and directed by Julie Cohen. Editor is Scott Feinstein. Field producer is Alex Lowther. Director of Photography is Rich White. Executives in Charge are Neal Shapiro and Stephen Segaller. Narrated by Lowell Deo.

As announced today on the Facebook Page, “THE SAVOY KING: Chick Webb and the Music That Changed America” is finally finished!

THE SAVOY KING is a feature documentary about the Swing-era drummer-bandleader Chick Webb, Ella Fitzgerald, and Harlem's Savoy Ballroom.

This is a clip from the new feature film.
Interviews with Norma Miller, Frankie Manning and Van Alexander, among others! 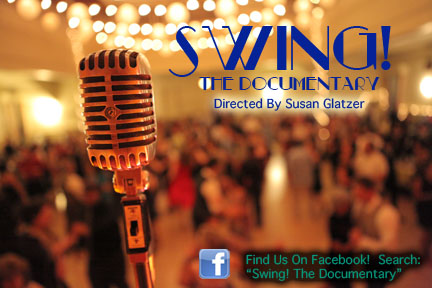 There is a new documentary about Swing dancing coming up:

Description of the Documentary

SWING! is as diverse and dynamic as the dance it depicts. The film explores the culture surrounding swing dance from the emergence of the Lindy Hop to the modern day international phenomenon. The film analyzes the growth of swing dance from its purely American roots as an art form, to countries all over the world. SWING! also looks at the lives of the swing dancers themselves to find their personal stories and why swing dancing fills them with joy.

Who is Susan Glatzer

Susan Glatzer's track record of productions and acquisitions has garnered seven Academy Awards® and 19 Academy Award® nominations along with numerous awards at the Cannes, Sundance, and Venice film festivals.

Serving as Senior Vice President for the Motion Picture Group at Paramount Pictures, Susan concentrated on co-productions and worldwide acquisitions.

Among the projects Susan has been involved with are Traffic, Napoleon Dynamite, Secrets & Lies, Narc, Breaking the Waves, and High Art.

Susan has been swing dancing for 12 years.

When will “Swing! The Documentary” be finished?

I asked this question to Susan Glatzer and here is her answer:
“We are in the middle of production and will be shooting through the beginning of next year. Then we will need several months of post production before we finish. It's a big undertaking!”

I bet, it's a big undertaking!

Update: Meanwhile, the title of the documentary was changed to “Alive and Kicking”.

Check out the Facebook Page for the latest informations.