I started DJ‘ing in 2006 with CDs but soon afterwards I switched to laptop DJ'ing. To spin and collect shellac (old 78 rpm) records was never an option to me. 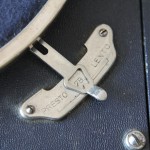 few months ago my quasi father-in-law gave me some 78 rpm jazz discs: “I thought you might be interested.” Of course, I was interested and I gladly took them. Now, how to play the records?

I was remembering when I was a kid, we had a portable record player at home which also could spin 78 rpm records. I asked my mother if I could have it and she agreed, it was stored somewhere in a basement room. Unfortunately, the box didn't work anymore. 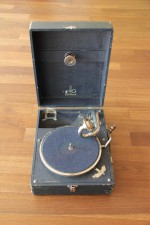 Last weekend, there was a small flea market at the Shuffle The House Saturday night party and there it caught my eye: a portable gramophone. “Wow, this is beautiful!” I thought and just bought it for CHF 120 (EUR 95 / USD 135). I (still) don't know if this is cheap or not, I just wanted to have it!

Back home I was a little bit nervous because I didn't know if the gramophone still works. So, I wound it up and played a record. To my great joy it worked. By the way, the first record I played came with the gramophone – a record with church songs…

While watching the gramophone spinning the record, a small inscription caught my attention: “FABRICATION SUISSE” which means “Swiss Made”. Now, this made me really curious and I googled “Paillard Grammophone”. I had no idea about the fact, that gramophones also were built in Switzerland.


Here are some informations about the company:

The company was founded in 1814 as a watch manufacture by watchmaker, mechanican and inventor Moïse Paillard. Soon after he started a studio with a few employees to produce music boxes.

In 1875 the company already had over 50 employees. At the beginning of the 20th century, Paillard began to produce cylinder phonographs and then gramophones.  Also metronomes, sharpeners, calculating machines and many more items were produced. In the meantime, the founder died and the company was renamed E. Paillard & Cie.

From 1927 Paillard built electric amplifiers for gramophones and from 1932 radio equipment. In the 1930s the typewriter “Baby-Hermes” and the “Bolex” film cameras and projectors were introduced. Paillard became one of the most successful Swiss manufacturer for these products, with 1'000 employees.

This success lasted until the 1960s with 8'000 employees worldwide, but more and more the company couldn't keep pace with the technological progress and eventually fell apart.

Unfortunately, I couldn't find any informations about my gramophone type on the web. There is no type label, only the imprinted number 301 in the inside of the lid, probably a serial number. I suppose, it was produced somewhen in the 1930s.

Do you have any Informations?

Please contact me, if you have any informations about these types of gramophones! All kind of datas are appreciated!