Beside Johnny Dodds and Sidney Bechet, Jimmie Noone is considered one of the three top New Orleans clarinetists of the 1920s. Noone had a smoother tone and his style influenced many musicians of the Swing era of the 1930s and 1940s, such as Benny Goodman.

As a child, he played the guitar before he started to take clarinet lessons at age 15. Sidney Bechet, who was 13 (thirteen!) at that time, was one of his teachers!

From 1913-1914 he played with Freddie Keppard and in 1916 with Buddy Petit and the Young Olympia Band. In 1917 he moved to Chicago (like many other musicians from New Orleans) to join Keppard's Creole Orchestra.

After breaking up in 1918 he became a member of King Oliver's Creole Jazz Band, where he stayed until 1920 to join Doc Cook's Dreamland Orchestra for the next years.

In 1927/1928 he started leading a band at the Apex Club. Pianist Earl Hines and alto saxophonist Joe Poston (how interplayed with Noone) were members in the quintet. They were recording for Vocalion including an early version of “Sweet Lorraine” (Noone's theme song) and “Four or Five Times.”

The music they played was a transition from the early jazz style (all instruments play at the same time) to the modern swing style (solos by Earl Hines and Jimmie Noone).

Throughout the 1930s, Noone worked mostly in Chicago. On some of his late 1930s recordings he played with trumpeter Charlie Shavers. Also young singer Joe Williams became a member of his band but unfortunately, Noone and Williams never recorded together.

In 1944, Noone was in Kid Ory‘s band in California but before Noone really could gain fame, he unexpectedly died of a heart attack. 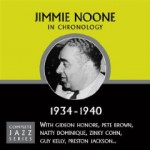 What is your favourite version of “Four Or Five Times”? Let us know in the comment section below!