I never thought I will write 100 Song of the Week posts, and there is still no end of the series in sight!

What song should be posted as the 100th song?

I decided to feature a song what had made history.

So, it's not about dancing today, it's about the first Jazz song ever recorded.

Unfortunately, I have to say, the first Jazz recording was not by a black artist, it was by a white group.

A black musician had the chance to be the first, though. It was Freddie Keppard, a cornetist from New Orleans, who got an offer by Victor in 1915 but he refused because he was afraid, that other musicians would steal his music (although, there are other theories out there as well)!

The fame of the first recording went to the white orchestra Original Dixieland Jass Band. On Februar 26, 1917, they recorded Livery Stable Blues, coupled with Dixie Jass Band One Step for the Victor Talking Machine Company.

This 78 record became a huge success and was sold massively. It marked the beginning of the Jazz era and launched Jazz as popular music.

They had already recorded for Columbia on January 31, 1917, but that session was unsuccessful. They went back to re-record the songs after the successful release of the Victor recordings.

The Original Dixieland Jazz Band called itself the creators of Jazz because it was the first band to record Jazz commercially. Band leader Nick La Rocca even claimed, that black musicians were not at all involved in creating Jazz (source: Ken Burns documentary “Jazz”)!

Read more about the Original Dixieland Jazz Band on Wikipedia. 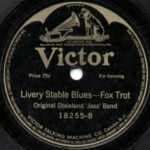