A genre I haven't touched so far is Western Swing, the forerunner of American Country music. One of its big stars was Spade Cooley – self proclaimed as the “King of Western Swing“.

He also was a successful actor in western films and TV host. Unfortunately, he was convicted of murdering his wife Ella Mae Evans in 1961. In 1969 he suffered a fatal heart attack.

You can find a biography on Wikipedia.

Stompin' At The Riverside

Stompin' At The Riverside is great tune for Balboa dancers. I'm not a big fan of country music, but this tune swings more than many other Western Swing tracks.

The accordion and the fiddles are giving special spice to this song. 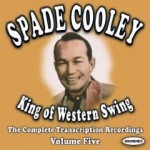