Back in November 2010, I posted “Smiles” by Swiss alto saxophonist Flavio Ambrosetti as the Song of the Week #35.

First, the studio version (it's a bit scratchy…)

And now, a live version, obviously from the same year (although, I don't have any evidence for that)

Smiles is wonderful song, both for Lindy Hop and Balboa. Because of the clear rhythm, it's especially useful for Balboa (beginner) classes.

Probably, I have written this before: I definitely recommend the album “[easyazon-link asin=”B0013AUWA4″ locale=”us”]The Complete RCA Victor Small Group Recordings[/easyazon-link]”. All the songs were carefully remastered in 1996 and it is one of my favorite compilations of Swing music ever!

Sometimes, I know exactly which song I would like to feature next and I write down the post in a short time.

But at times, I only know a certain criteria the song should have – e.g. a slower tempo – but can't decide which song. Then I change and change again and eventually, I have spent an hour or more, only to pick a song.

This week, the latter was the case. However, I have found one deep in my library and here is a new song for you: comfortable tempo, groovy, quite long actually :).

The song is called “Rosetta” and was performed and recorded by Al Casey in the 1970s.

Al Casey is best known for his collaboration with Fats Waller. In 1934, he got his first professional job with Waller and he worked with him until Waller's death in 1943. During that time, Casey played with Fats Waller's Rhythm on more than 200 records.

While his association with Waller, Casey played with Teddy Wilson's Big Band from 1939 – 1940 and recorded with Billie Holiday, among others.

Shortly after Waller's passing, Casey switched from acoustic to electric guitar, leading his own trio and being considered one of the best guitarists after Charlie Christian‘s death.

In 1957, Casey joined R&B saxophonist King Curtis‘ band and played for four years with him. In the 1970s he recorded with Helen Humes and Jay McShann, and in the 1980s with the Harlem Blues and Jazz Band.

Even in the 1990s he was still active as musician. 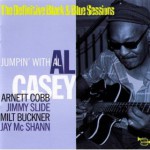