Another very influential jazz pianist I haven't written about so far, was Thomas Wright “Fats” Waller (21.05.1904 – 15.12.1943). He was a master of stride piano, but also organist, composer, singer and funny entertainer.

Waller's father was a Baptist lay preacher and his mother played piano and organ. He started to play piano at age six. When he was ten, he learned playing organ in his father's church. Five years later, he composed his first rag called “Squeeze Me“.

In 1922 he made his first record for Okeh at age 18. After that he backed various blues singers, worked as pianist and organist at rent parties, in movie theatre and clubs.

Waller was very productive and he wrote hundreds of songs, many of them with co-writer Andy Razaf.

Honeysuckle Rose is one of these, it was written in 1929. Our song of the week is the version recorded in 1934. It was inducted into the Grammy Hall of Fame – a special Grammy award established in 1973 to honour recordings that are at least 25 years old and that have “qualitative or historical significance”. 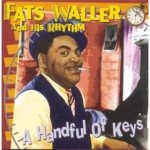 Click the link to prelisten and/or buy the song (mp3/mp4a) at
iTunes EU — iTunes US — Amazon.de — Amazon.com — eMusic*

Which version of Honeysuckle Rose by any artist is your favourite one? Let us know in the comment section below!