The theme of the Friday night masquerade party in week 2 of this year's Herrang Dance Camp was Tiki Herräng:

“The year is 1959 and Hawaii is becoming Americas 50th state. Tiki culture is at its peak and Hawaiian shirts, bamboo lounges and carved tiki´s are more popular than ever. Elvis is rattling his knees from one side to another in the army and “Mac the knife” is No.1 on the charts. Empty the brylcreem jar, pop your gum and come and get yourself a tropical fruit punch at the Herranga Tiki Bamboo Lounge. Aloha!”

I was scheduled for two DJ sets at that night, a Lindy Hop and a Balboa set. So I thought, I'm going to find some tunes for these sets, either in Hawaiian style or from Hawaii itself.

One song I've found in many different versions is a Hawaiian War Chant called Ta-Hu-Wa-Hu-Wai.

Born Andrew Aiona Long in the town of Waimea, Kauai, he played many instruments, especially steel guitar and saxophone. Additionally he was an arranger and composer.

In 1921 Andy began to play Hawaiian music on the mainland, mostly in New York and California, but also toured Japan for a period of time between the 1920s and 1930s.

In New York he was playing steel guitar for a series of television tapes in the 1940s and he starred in the different movies. From 1951-1952, Andy toured with Hawaiian Falsetto great George Kainapau in the.

Andy’s personal musical influences came both from other Hawaiian musicians and from great jazz musicians. 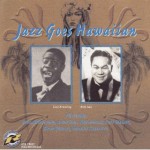