Beside Coleman Hawkins (Song of the Week #52) another tenor saxophonist is regarded as one of the most influential saxophonist of the jazz era: Lester Wills Young (27.08.1909-25.03.1959), nicknamed “Prez” or “Pres” (from president) by Billie Holiday.

Lester Young came to prominence while a member of Count Basie's Orchestra. His characteristic light sound and elegant way of playing stood in complete contrast to Coleman Hawkins's more powerful approach of playing the instrument. 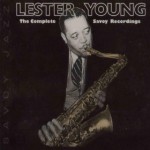 Wow guys, it's been almost one crazy year now when I started this series.

I had no idea if I could keep up with… yes, I'm proud! And I'm pretty sure there will be at least one more year with an ongoing Song of the Week on Mondays :-)!

So, for the last song of the first year, I have chosen the standard “On The Sunny Side of the Street“, recorded by Coleman Hawkins in 1944 – not to be confused with earlier versions by Hawkins, which all are shorter.

Scott Yanow describes Hawkins as follows on allmusic.com: “Coleman Hawkins was the first important tenor saxophonist and he remains one of the greatest of all time.

A consistently modern improviser whose knowledge of chords and harmonies was encyclopedic, Hawkins had a 40-year prime (1925-1965) during which he could hold his own with any competitor.”

Did you know? In the 30s, Hawkins spent some years in Europe. For me especially interesting:

During that time, he stayed for a longer time in Switzerland, where he played a session in May 1936 with Ernst Höllerhagen and the Berries (with Hawkins as vocalist!).

There are several reasons, why I love this song: