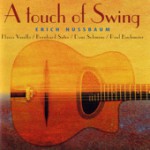 Django Reinhardt was born into a french speaking gypsy – so-called Manouche – family and grew up near Paris.

He learned violin, banjo and the guitar very early and at the age of twelve or thirteen (depends on the source), he already was a professional musician.

In 1928 Django was heavily injured in a fire of his caravan. His right leg was paralysed and his left hand was badly burned. The doctors wanted to amputate his leg but Django refused.

The legendary The Quintet of the Hot Club of France was born in 1934 after Django met Stéphane Grappelli. It was one of the few well-known jazz ensembles composed only of string instruments.

The small record company Ultraphone recorded their first sides Dinah, Tiger Rag, Oh Lady be Good, and I Saw Stars which caused a sensation. The band went on to record hundreds of record side.

The Quintet broke at the beginning of World War II. Django recorded troughout the war years and after the war, he was rejoined by Stéphane and they again performed and recorded.

In 1951 Django retired, in 1953 he suffered a massive brain hemorrhage and died.

One of it is the often covered tune Minor Swing, representing the typical sound of Gypsy Swing by Django Reinhardt and his fellows.