The Harlem Hamfats were formed in 1936 in Chicago. Their main purpose was backing jazz and blues singers for Decca. But when their first recording “Oh! Red” (also a nice Balboa track…) became a hit, they got a contract by Decca for 50 titles.

None of the musicians came from Harlem as the band title would suggest, nor were they hamfats, a slang expression for indifferent musicians. The brothers Joe and Charlie McCoy were blues players from Mississippi, leader Herb Morand, Odell Rand, and John Lindsay were from New Orleans, Horace Malcolm and drummers Pearlis Williams and Freddie Flynn were from Chicago.

The result was a blend of different blues styles with New Orleans and swing jazz. They are considered as one of the very first bands playing Rhythm & Blues, influencing Louis Jordan and early Muddy Waters.

Root Hog Or Die is a tune with nice harmonies in a minor key, wonderful bluesy and melancholic. The rhythm is perfect for Balboa dancing!

Note: The sound quality of this 2011 compilation is awesome! There is a version on another album, which is slightly faster! 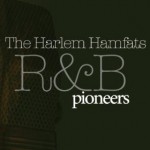