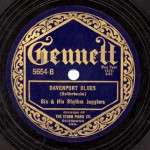 
Last week I've featured a song by Gordon Webster‘s own band. This week's song is by an another contemporary band Gordon is playing with: The Cangelosi Cards.

The Cangelosi Cards, established and based in New York City, started in 2006 playing at small clubs and restaurants.

Quickly, the were building a vast repertoire of early American jazz and attracting both local swing dancers and old-time jazz lovers.

Beside the weekly engagements the are performing at larger events as Swing Out New Hampshire, Frankie 95 or the Herrang Dance Camp, only to name a few.

In 2009 in Herrang was the first time when I heard the band and I was highly impressed by their energy, the unusual musical instrumentation and especially by the unique high-pitched voice of Tamar Korn.

During their stay at the camp we had the opportunity to listen to the Cards on many occasions: the official concerts and the jam sessions, mostly in the early morning hours (one more reason to come to Herrang, if you never have been there!).

The Cangelosi Cards are an awesome dance band!

My Blue Heaven is a good example showing the special style of the Cards and I like to spin that tune occasionally as a DJ.

What shall I say, this is a song every Swing dancer should know.

I think it's not wrong to say that the song is overused for performances and probably also overplayed on the dance floor. However, it's a great tune!

When this song was recorded, Chick Webb has already died – a few months before, at the age of only 34 – and Ella Fitzgerald led the orchestra.

After taking some time off from music, British musician and songwriter Bryan Ferry (born 26.09.1945) – most known as a founding member of re-reformed Roxy Music and as a solo artist – returned in 1999 to perform a mix of 1930s songs and songs of his own.

As a result, he recorded the album As Time Goes By, which was nominated for a Grammy award.

Ferry has the ability to cover standards in a way, you could think these are his own songs. His whispering and breathing way of singing reinforces this feeling.

My favourite song of the album is Lover Come Back To Me.

The recording has a nice live feeling and the band is beautifully swinging. Light and easy. Great for Balboa dancing.

It was in Herrang in 2006, when I heard that song by Sidney Bechet the first time.

Skye Humphries used only this particular song the whole week in his classes and pretty soon, the DJs played it also during the nights.

I remember when I was asking for the title: “Blues my naught… what???” Such a long bizarre title was hard to memorize, but eventually I made it and I bought the song right after the camp.

Meanwhile, Blues My Naughty Sweetie Gives To Me probably is overplayed on the dance floor but in this case, I don't care.

It's definitely one of my absolute all time favorites! Sidney Bechet's style to play the soprano saxophone with a wide vibrato is distinctive (love it or hate it, I know).

Be aware, the tune is pretty long.