I just stumbled upon Project Q (thanks to Jerry Salmonte's Facebook Page!) and I would like to coordinate a group of dancers in and around Zurich to participate in this project!

What is Project Q about

The following description is taken from their former website:

“The goal of Project Q is to bring Lindy Hoppers from around the globe to illustrate, in a visual way, the power behind future technologies that are based on the laws of quantum mechanics. To pull this off we need your help.

The idea is to have different scenes from around the world film themselves dancing a short routine inspired by Frankie’s Lindy Chorus. The footage will be edited together (similar to what was done for the Frankie 95 Global Shim Sham) and incorporated into a live performance at a high profile event taking place in the spring.

This will be an excellent opportunity to showcase Lindy Hop to a large international audience.”

The song is “Dr. Jazz” by Roberta Hunt, especially arranged for the routine. The routine starts at around 2:19.

Krister Shalm is the initiator of Project Q. In his life outside of Lindy Hop, he is an experimental physicist at the Institute for Quantum Computing at the University of Waterloo in Ontario, Canada.

What do you think about linking Lindy Hop with Science?

Please let me know in the comment section below.

Note: This post was edited at the beginning of March 2012.

I have to bring this song, it's too good, although it might be a little bit overplayed right now, especially on the Balboa dance floors.

Well, some of you might know the song from “Lindy Chorus“, a routine choreographed by Frankie Manning. If you don't know what I'm talking about, here is an example of “Lindy Chorus” from 2011:

When the regular pianist missed a recording session in 1929, John Williams, who was the saxophonist in the band, suggested to hire his wife Mary Lou Williams. Andy Kirk agreed and as we know today, that was a wise decision.

Mary Lou Williams was the real star in the band. She was not only a great soloist but also arranger and composer for the band. A great portion of the credit, that the band was so popular and successful, belongs without doubt to her!

Why is this song so appealing to me?

First, it's the staccato style. Then there are those monotone lines repeatedly appearing, by the horn section but also by some soloists. And lastly, the transition from these two characteristics to some softer solo phrases. You know, what I mean? 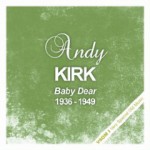 Do you think, Wednesday Night Hop is overplayed? Let us know in the comment section below!