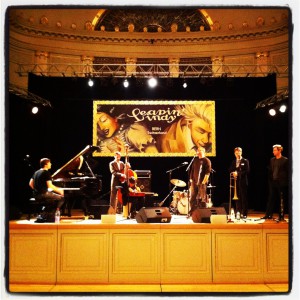 Effective from November 18, 2010, eMusic changed their pricing system from a credit-per-track system to monetary pricing.

eMusic say it gives them the flexibility to offer more music from both major and indie labels.

What does that mean:

“eMusic has always looked to be a home for thoughtful fans of music, no matter the source. Our aim has always been to offer the most complete selection of music possible.

To that end we are adding to our U.S. catalogue over 250,000 titles from Universal Music Group, as well as new releases from Sony Music Entertainment and Warner Music Group – much of this goes live on eMusic on November 18 in the U.S. and the balance over the next few weeks. This is in addition to their catalog, which has been live for a year.

These labels join thousands of labels already working with us to offer you the best music selection possible; in the future we will welcome more music in the UK, Europe and Canada as well. In the process of expanding our catalog and making the changes necessary to serve our members and ensure the long-term sustainability of our business, a few labels have chosen to exclude themselves from the new comprehensive eMusic offering.

We are treating all labels equally and therefore we believe fairly. We will greatly miss their artists and their music and trust that they will find their way back to our members soon. We remain committed to the unique voice we have cultivated on the eMusic site, and to highlighting the music that inspires us, whether it’s sold 4 or 4 million copies, regardless of what label has released it.

Our focus is on our members and we look forward to working with all of our label partners – new and existing – and to creating a service that benefits them, their artists and our members.

Bix taught himself to play cornet by ear, he never learned to read music well. Unfortunately he drank himself to an early death.

He first recorded with the Wolverines in 1924, after which he played briefly for the Jean Goldkette Orchestra before joining Frankie Trumbauer's Orchestra in 1926.

In the same year, Beiderbecke and Trumbauer both joined Goldkette.

The following year, Trumbauer and Beiderbecke left Goldkette to join the best-known and most prestigious dance orchestra in the country: the New York–based Paul Whiteman Orchestra.

Singin' the Blues (together with the recording “I'm Coming, Virginia”) is a milestone in Jazz history.

The jazz ballad style was born and some elements can be found in Cool Jazz of the 1950s and 1960s. Bix had an unusual purity of tone and he was a genius of improvisation.

She was a dedicated jazz pianist, who established a reputation as “Hot Miss Lil,” one of the few female band ensemble members of the 1920’s.

She played on many of the first jazz recordings ever made and she wrote many of the early songs of the jazz era. Though she might be identified in the jazz world as the wife of Louis Armstrong, she was much more than that.

Read the full biography on allaboutjazz.com

Lil Hardin's You Shall Reap What You Sow is my song of the week: solid rhythm section, light and beautiful harmonies. I especially like Lil's soft voice and the different short solos.

After having seen tenor saxophonist Coleman Hawkins performing in Switzerland in the late 30s, he started to play saxophone.

Ambrosetti was one of the pioneers of the bebop style in Europe.

In 1949 he played at the legendary Jazz Festival Paris in Hazy Osterwald‘s band and met his number one influence Charlie Parker.

1972 he founded with his son Franco, with Daniel Humair and George Gruntz The Band, which later evolved to the George Gruntz Concert Jazz Band. Ambrosetti also was the organiser of the International Jazz Festival Lugano.

Smiles, recorded 1943 with his sextet, is a song I play quite often as a Swing DJ. Not too fast but with a great pumping rhythm section and a soulful Ambrosetti at the vibraphone.