There are two male blues & jazz singers I really adore. One is Joe Williams and the other one is Jimmy Rushing.

Jimmy, born as James Andrew, Rushing (Aug. 26, 1901 – June 8, 1972) was known as “Mr. Five by Five” due his corpulent shape. He was famous for his blues interpretations but actually, he could sing almost anything.

Rushing played violin and piano in his youth and studied music in high school. By the time he was 18, he began working professionally as a singer.

From 1923-1924, he was singing in California (with Jelly Roll Morton amongst others). In 1927, he moved to Kansas City and joined Walter Page's Blue Devils. He recorded with them in 1929 and then joined Bennie Moten in the same year, staying until Moten's death in 1935.

Rushing was with Basie until October 1948 and occasionally during 1949. When the Count Basie Orchestra broke up in 1950, he shortly retired and then formed his own combo (1950-1952). He freelanced as a soloist during the 1950s.

In 1957, Rushing appeared with Count Basie at the Newport Jazz Festival. With Benny Goodman he had an appearance at the Brussels World Fair and in 1959, he toured Europe with Buck Clayton.

In the 1960s, he sang with Harry James, Benny Goodman and Eddie Condon and stayed active until his death in 1972.

I Want A Little Girl

A clip from “The Subject is Jazz”, presented by Dr. Billy Taylor, summer 1958

“I Want A Little Girl” is a beautiful blues. Jimmy Rushing's distinctive voice could be powerful with a wide range from baritone to tenor. But it could also be warm, soft and soulful like in this number.

Back in November 2010, I posted “Smiles” by Swiss alto saxophonist Flavio Ambrosetti as the Song of the Week #35.

First, the studio version (it's a bit scratchy…)

And now, a live version, obviously from the same year (although, I don't have any evidence for that)

Smiles is wonderful song, both for Lindy Hop and Balboa. Because of the clear rhythm, it's especially useful for Balboa (beginner) classes.

Probably, I have written this before: I definitely recommend the album “[easyazon-link asin=”B0013AUWA4″ locale=”us”]The Complete RCA Victor Small Group Recordings[/easyazon-link]”. All the songs were carefully remastered in 1996 and it is one of my favorite compilations of Swing music ever! 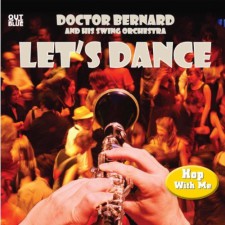 One of my favourite contemporary swing musicians, a fabulous clarinetist from the Netherlands, is Bernard Berkhout.

Bernard used to play with small groups, but after reading the book “Swingin' the Dream: Big Band Jazz and the Rebirth of American Culture” by Lewis A. Erenberg [Amazon.de | Amazon.com], he realized the historical importance of his musical hero Benny Goodman and he was so inspired, that he started his own big band.

The big band album was in the air since more than a year, but we had to be patient, until it was finally released in July 2011. It was well worth the wait!

I have to confess, I'm not a huge fan of contemporary big bands. In my opinion, most of them are boring, uninspired, too clean and I often miss a certain amount of “dirt” in the music, if you know what I mean.

But here we have something completely different.

From the very first tone, I was impressed by the sound. The orchestra plays with such a fresh and relaxed but hard swinging drive, there is so much joy in the music, that you can't sit still!

And Bernard himself is proving again, that he is THE master on clarinet. His solos are top notch! I have no idea how one can play an instrument with such a virtuosity :).

Not to forget to mention all the other musicians who have done an incredible great job.

No wonder! The local Lindy Hop community in the Netherlands was involved from the beginning of the project. As Bernard writes in the 24-page (!) booklet coming with the CD, two of the Lindy Hoppers stand out:

“Dancer and swing DJ Robert Cullen became my sounding board, my musical conscience and co-producer. Dancer and clarinetist Frans van Dommelen was extremely generous in approaching his many contacts in the world of dance, and he was ever-present and supportive no matter how far away from home we performed or rehearsed. Both of them participated in long discussions about repertoire, length and tempos.”

The result is an album for dancers.

The music is based entirely on the ideas and arrangements of Benny Goodman. The length of the songs is in the range between 3:00 and 4:49 minutes. As usual for this kind of CDs, the bpm are listed: the tempos vary between 114 and 232 bpm. There are songs for any dance level!

This album is by far the best contemporary big band recording I've ever heard! There are always downsides, but honestly, I can't find one.

I highly recommend “Let's Dance” and I'm convinced we will hear songs from the recording very often on the dance floor.

Check out another Top Swing Album of 2011:

I'm a big admirer of Benny Goodman's small group recordings from 1935 to 1939. He recorded with different group sizes and what I like is the relaxness in the songs, there is so much joy of play hearable.

The sound is full and often, you get the feeling, there were many more musicians involved than actually were.

Most of the recordings were done as a quartet, with Gene Krupa on drums, Teddy Wilson on piano and Lionel Hampton on vibes.

Please note, that two of the musicians (Wilson and Hampton) were black. It was quite uncommon at that time to have mixed orchestras. In fact, Benny Goodman was hesitating for a long time to perform with black musicians on stage because of race discrimination.

Moonglow (or Moon Glow) was recorded by the quartet in 1936 and there are two existing takes. Take two is a tad faster than take one and is our song of the week. The same tune was a number one hit two years before, recorded by Goodman's freshly organized permanent performance orchestra.

Moonglow is a quite slow Lindy Hop tune, which suits perfectly to the winter season we have right now in Europe. Imagine, it's cold outside and you are attending an afternoon swing event. You drink some hot tea, eat a piece of cake and dance to this song.

I recommend “The Complete RCA Victor Small Group Recordings” for every swing dancer and music lover, it's one of the best compilations I've ever bought. The remastering is softly and respectfully done without damaging the original sound feeling. 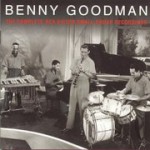 Click the link to prelisten and/or buy the song (mp3/mp4a) at
iTunes CH/EU — iTunes US — Amazon.de — Amazon.com

What do you think about Benny Goodman's small group recordings? Let us know in the comment section below!

The use of the harpsichord in Come On-A My House by Rosemary Clooney [Song of the Week #68] was inspired by the song of this week.

Like Benny Goodman with his different small groups,  clarinetist, composer and bandleader Artie Shaw (born: Arthur Jacob Arshawsky, 23.5.1910 – 30.12.2004) created a smaller combo out of his big band and called it Artie Shaw and his Gramercy Five. He needed something special to create a distinctive sound.

As Johnny Guarnieri told “Piano Jazz” radio host Marian McPartland in 1981, he was already in Shaw's big band when Shaw called him one day in the fall of 1940: “Shaw asked me if I'd ever played the harpsichord, and I said: ‘Certainly.' And he said, ‘Well that's great; we're gonna make some records tomorrow.' . . . I was lying! So I said, ‘Artie—I don't know what a harpsichord is.' . . . He says, ‘I have one up the house; let's go up there tonight—and we'll rehearse, and we'll make some records tomorrow.'”

The pianist got the hang of the antique instrument (with its stiffer keyboard action) pretty fast, he told a writer from Time-Life records in 1973: “I went home and practiced until I could trill with the fourth and fifth fingers for twenty seconds, then I was okay.”

Source: “Hip to the Harpsichord” The Wallstreet Journal – Masterpiece

The result was the recording of “Summit Ridge Drive” which became a million-seller and one of Shaw's all-time favourite numbers, among others like “Frenesi“. 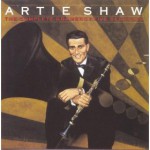